Wealth inequalities persisted in 2019, according to the latest Survey of Income and Program Participation (SIPP) data released in October 2021.

For example, it shows that baby boomers are nearly nine times wealthier than millennials.

The SIPP’s sample size enables comparisons of the assets of many populations and groups such as low-income households and households with or without children.

When excluding home equity, Generation X and baby boomers had a median wealth of $48,070 and $90,060, respectively.

Median home equity (the value of a home minus the mortgage balance) was $130,000, and the median household retirement account balance was $69,900.

Households that owned their home had a median wealth of $305,000, substantially larger than those that rented ($4,084).

The generation in which a householder (those who owned or rented their home) was born affects household wealth.

When excluding home equity, Generation X and baby boomers had a median wealth of $48,070 and $90,060, respectively. 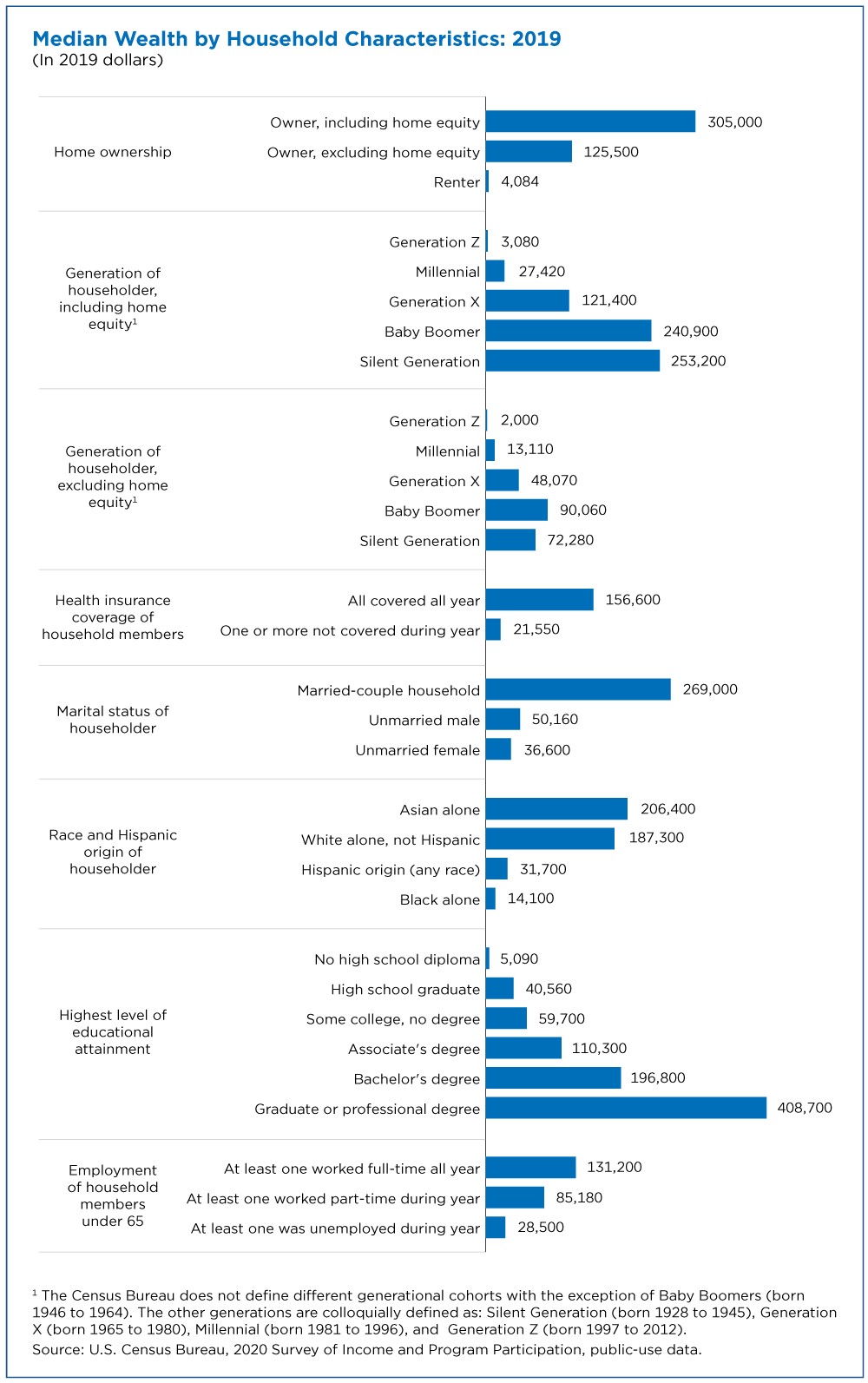 Households with members who did not have health insurance all or part of the year had dramatically lower median wealth ($21,550) than households in which all members had coverage for the full year ($156,600).

Those without health insurance were almost twice as likely as fully insured households to hold medical debt (27.9% and 14.6%, respectively).

Unmarried female householders of any age had a median wealth of $36,600.

Such disparities by sex and marital status persisted over most age groups.

Higher education can be linked to higher median household wealth.

Those with graduate or professional degrees had about twice the median wealth ($408,700) of bachelor’s degree holders.

Households in which at least one member was unemployed or worked part-time during the year had less wealth than those in which one or more members worked full-time, year-round.

What Is the SIPP?

The SIPP is a nationally representative longitudinal survey administered by the Census Bureau that provides comprehensive information on the dynamics of income, employment, household composition and government program participation.

Neil Bennett and Briana Sullivan are economists and Donald Hays is a survey statistician in the Census Bureau’s Social, Economic and Housing Statistics Division.

Article Courtesy of the US Census Bureau